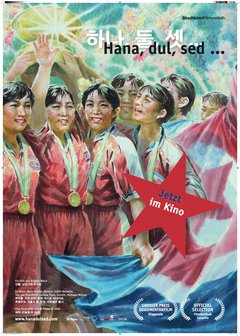 Hana, dul, sed ... is a film about four young women, their friendship, dreams, hopes, and the passion for football they share. Being a member of the national team is not only a way to make a living but gives the players prestige, popularity, and certain privileges, like larger food rations.
As "players of the people" they lead North Korea to victory in numerous tournaments, and together they rise to rank among the top ten women’s teams in the world. But when they fail to qualify for the Olympics, it is time for them to retire from competition, and each of them starts a new life. The camera follows the four protagonists during their active careers and after retirement, unobtrusively observing their everyday lives against the backdrop of bombastic monuments and solemn gestures in this communist hermit state.

Original version with english subtitles; Winner of the "Großer Diagonale-Preis 2010" as the best Austrian documentary